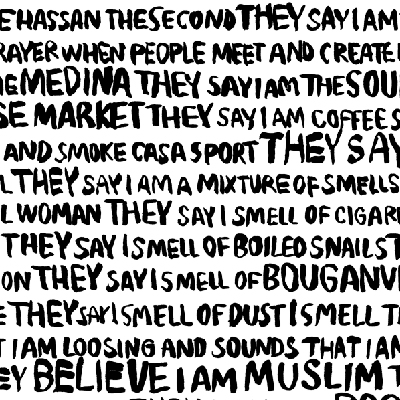 “Casablanca Tells” is a choral work which presents a layered dialogue between different facets of the city. The artist uses numerous recordings captured through the streets of the city to chronicle its complex identity. Three distinct ‘movements’ emerge and aggregate to form an aural representation of the central protagonist – Casablanca.
A multitude of street recordings capturing throngs of voices and languages, these vocal fragments are overlaid by ambient sonic rhythms and a-rhythms.
The city is embodied through a male and female voice that act as the central narrators of the city. These monologues where constructed using many recorded interviews taken across the urban soundscape.
To stretch the importance of the core characteristics of the city- its chaotic and organic resistance – a selection of the most prominent Nass El Ghiwan songs have been interpreted by people met on the street and then translated into a vocal interpretation by a Soprano singer, Myriam Sif.
Casablanca will thus translated via a work of sonic spazialisation concieved in situ for the place of the exhibition.